Leicester’s efforts in vain as Kane claims a matchball 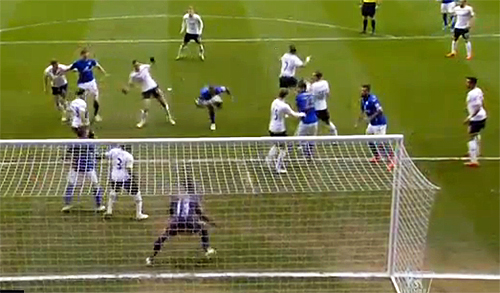 City overcame a dreadful start to get themselves back into this game, but left White Hart Lane with nothing thanks to a Harry Kane hat-trick…

Nigel Pearson made three changes to his side, with Schmeichel returning after a four month injury lay-off, and Ulloa and Nugent in for Mahrez and Kramarić.
Spurs had to make a change after just three minutes. A Vardy charge down the left was flagged offside but Walker crashed into keeper Lloris, who had to be replaced by Vorm after lengthy treatment.
However, Spurs were ahead by the 6th minute. Townsend delivered a corner from the left and Dier flicked it on at the near post. It looked like a straightforward headed clearance for Upson before Schmeichel stretched to divert it and the ball dropped kindly for Kane who couldn’t miss from close in.
At the other end Nugent’s long-range swerving shot almost caught Vorm out, but it was the home side who added to the scoreline in the 13th minute. Walker’s cross from th eright was half-cleared by Huth into the path of Kane. His shot took a big deflection off the German defender’s chest and ended up in the back of the net.
A good save from Schmeichel diverted an Eriksen shot onto the post after he had unzipped City’s defence, and prevented Spurs from disappearing over the horizon.
Instead, it was City who got themselves back in contention in the 38th minute.
A James ball sent Nugent racing down the and right and he delivered a perfect cross for Vardy to slot home at the far post.
City were the better side by this stage: Rose had to put in a fine tackle to deny Nugent and then Ulloa headed over from a corner under no pressure.
City, with Wasilewski on for Upson, started the second half in the same vein. Ulloa, in on the right, picked out Nugent three yards out, but Walker managed to block his shot over the bar. From the resulting corner Morgan was given the freedom of the penalty area to nod the ball past Vorm and level the game.
City looked the more likely to take the lead at this stage, but Huth couldn’t direct his header on target from a James corner.
It was Spurs who got another slice of luck in the 63rd minute when Nugent and Rose collided in the penalty area. It looked like Rose had at least as much to do with the coming together as Nugent but Mike Dean pointed to the spot and Kane completed his first Premier League hat-trick from 12 yards.
Kane and then Chaldli should have made it 4-2, scooping chances over the bar, before Mahrez came on for Huth.
Although City were trying to press forward Tottenham struck again with 5 minutes remaining.
Schmeichel came out smartly to block an Eriksen effort, but Schlupp was ill-rewarded for charging back to help out and the ball cannoned off him and into the net.
Still City weren’t finished and Nugent battled through the Spurs defence before sending a precise shot past Vorm, but it was too late to make a difference.

To get nothing from such a decent performance was tough, but it is getting harder to see an escape route now. 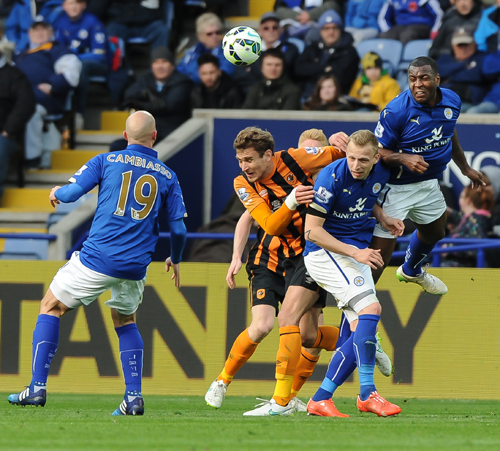 Nigel Pearson persisted with his five-man defence, but made two changes to the side that lost at Manchester City: Vardy and De Laet in for Simpson and Konchesky with Schlupp moving to wing-back.
If it was nominally a more attacking line-up with more mobile wing-backs, that didn’t translate into chances as City struggled to make any impression on a struggling Hull side.
After Kramarić sent a shot narrowly over the bar Hull should have gone ahead in the 15th minute.
Elmohamady teed up Jelavic for a golden chance which he somehow scuffed to let City off the hook.
Soon after that he had the ball in the net, but N’Doye had impeded Schwarzer during the build up.
Off target efforts from Mahrez and Kramarić and a Mahrez free-kick deflected wide were the only other noteworthy incidents in a half seriously lacking in Premier League quality. 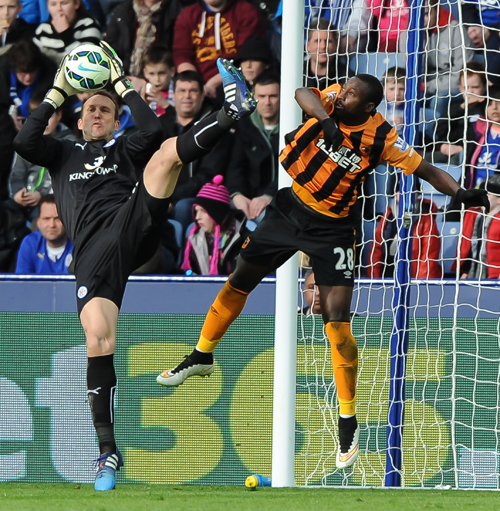 The second half wasn’t a great improvement.
Pearson made his first change in the 61st minute bringing Ulloa on for Kramarić.
City greatest threat came from Vardy’s strong running down the left. He won a corner, but Huth couldn’t keep his header on target.
Hull were getting physical at this stage. Dawson was booked for a foul on Vardy and then Bruce also saw yellow for clattering Mahrez. Vardy then ran almost the length of the pitch before Huddlestone, already on a yellow, brought him down to earn a red card. 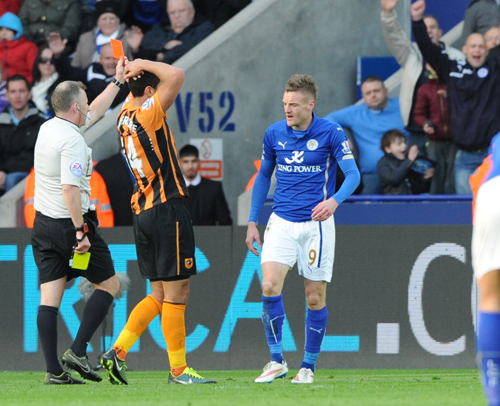 City couldn’t punish Hull with these free-kicks and when a defender was eventually sacrificed against the ten men, Lawrence on for De Laet, it seemed to make no difference.
In the closing stages of a game they could not afford to lose there was no urgency and no pressure on the Hull goal.
In fact Hull should have won the game when City’s defence were caught napping by a quickly-taken free-kick by N’Doye which sent Hernandez in on goal, only for Schwarzer to block well.

It was a woeful display from City who now need a miracle to prevent an instant return to the Championship.
Nigel Pearson’s comment that we need five wins, when we have only managed four all season, was almost as ridiculous as his descent into foul language and insults at the end of the press conference.
A shameful day all round… and no end to it in sight. 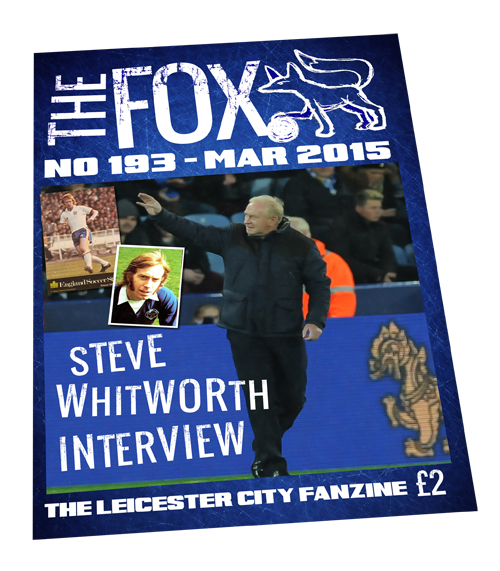 FOX 193 features: an interview with former-City and England right back Steve Whitworth; Something Old, Something New; Fully Programmed from 1995-96; Fox Diary; the latest from the Foxes Trust; Nigel Pearson gets the Twitterati all excited; Rewind features Joey, from the halfway line; Foxed in the Head – Elusive Leicester stickers and fighting Teds that come up the school; the Chris Lymn Column; John Hutchinson applies his magnifying glass to another slice of the club’s history; your letters and Bentley’s Roof; Parting Shots our favourite photos of the last month….

FOX: You are a Coalville boy?

FOX: A Leicester City fan as a lad we presume?

SW: Oh yes, fanatical, absolutely bonkers on them. My Dad first took me down to Filbert Street when I was about 8 or 9.
I can’t quite remember who City played in the first game, but I do recall seeing Stanley Matthews playing for Blackpool. I also remember 40,000 odd in Filbert Street for a game against Spurs and me being passed over the heads and sent down to the front so I could see.
There wasn’t much else to do in those days but go and see City, or play football all day. Kicking a ball around, and if you didn’t have a ball a can would do. Straight from school you would go down to the park and there would be kids there from 8 to 18. Pick two teams and get on with it. You’d play down there until it was pitch black – absolutely fantastic. 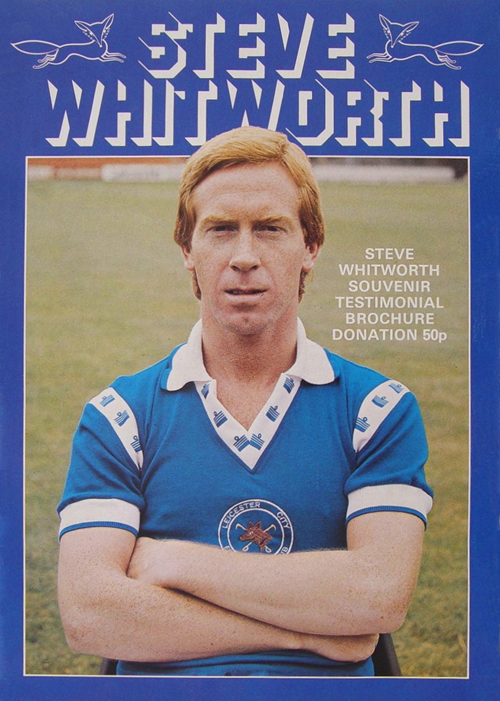 Leicester park the bus at the Etihad – and pay the penalty 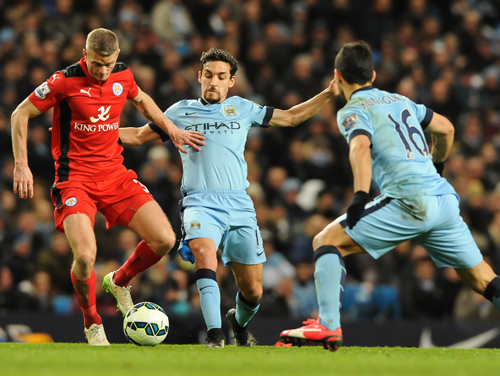 While Nigel Pearson stuck with the side that drew at Everton, the big team news of the night was City skipper Kompany being relegated to the bench.
Though with City camped in their own third and at one point having just 22% possession chances to test the new-look defence were rare.
In the third minute Bony, met a Silva’s corner, but Cambiasso cleared comfortably off the line. Other than that, a packed Leicester defence managed to restrict City to a long range effort from Toure that didn’t test Schwarzer.
But it was Leicester who should have made a breakthrough when Schlupp broke down the left only to be pushed over by Bony for a clear penalty, but referee Robert Madley waved play on. 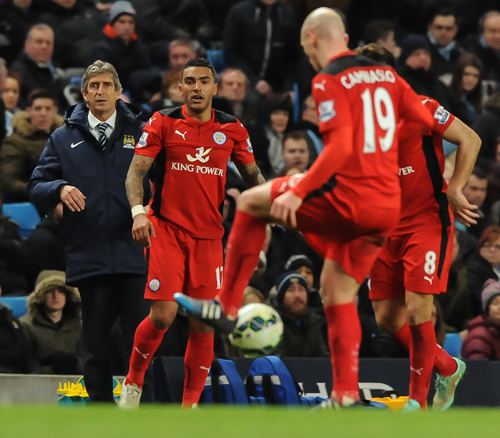 In the 25th minute they were more appeals from the visitors when Kramarić, chased a Mahrez through ball into the area and was upended by City keeper Hart, though he appeared to just touch the ball before the man.
The evening then got busier for Schwarzer  as he produced good saves to deny Bony and then Toure.
A clever lob from Silva then sent Bony clean through but he blazed his finish high and wide.
Just when it looked as though Leicester could congratulate themselves on surviving the half unscathed, some static defending in injury time saw Silva reacting swiftly to a rebound off Morgan to put the Champions ahead.

Leicester had another penalty denied them early in the second half when Kramarić was tripped by Fernando just inside the area.
This time referee Madley saw the foul but placed it outside the box. Kramarić sent the free-kick inches wide of the left hand upright.
In the 57th minute Pearson made his first changes, with Nugent and Vardy on for Koncheksy and Kramarić.
The hosts started to turn th escrew on Leicester, but some fine saves from Schwarzer kept them at bay. By this point he was flinging himself around his goalmouth to deny efforts from Toure, Kolarov and Silva. 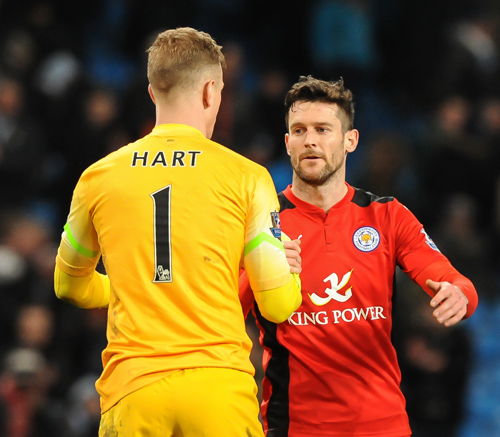 Amidst this action was one great chance for Leicester when Mahrez beat the unsighted Hart with a low shot, but he hit the right hand post.
Soon after that Mahrez made way for Ulloa, but Leicester appeared to run out of steam in the last fifteen minutes.
It was City who added to the scoreline late on when Milner found too much space in the goalmouth to prod home a Navas cross and seal the victory.
While replays showed that City should have been awarded two penalties, we are left wondering what could have been achieved with a more adventurous set-up against a side that have not been at their best in recent weeks.