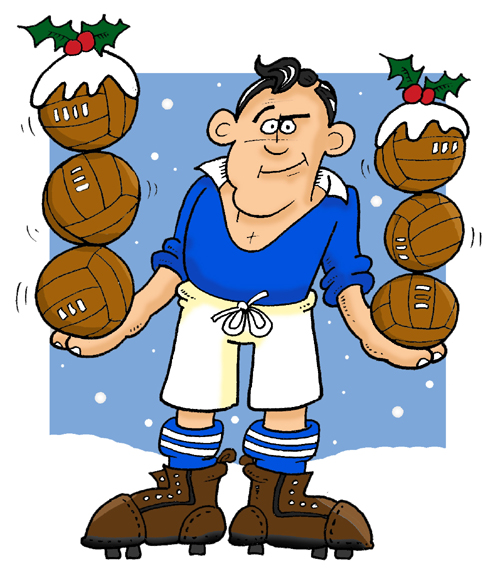 They will receive all the issues that have come out by mid-December this season: The Summer Special 2013; FOX 186 and FOX 187, will be posted in time for Christmas and will be gift-wrapped. 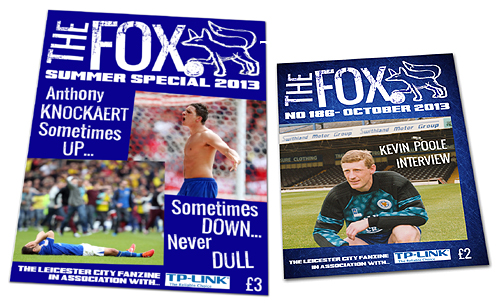 Also included will be a set of 12 Leicester City postcards and 5 full colour 8″ x 10″ prints).
The recipient will then receive the rest of the season’s issues as they are published in 2014… 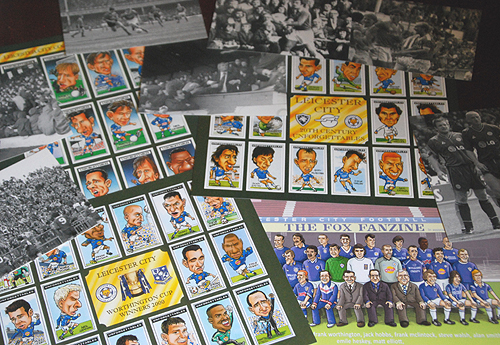 All this Leicester City related fun and games for just £14…

You can either pay online via Paypal here..

Please remember to put a personal message if required… 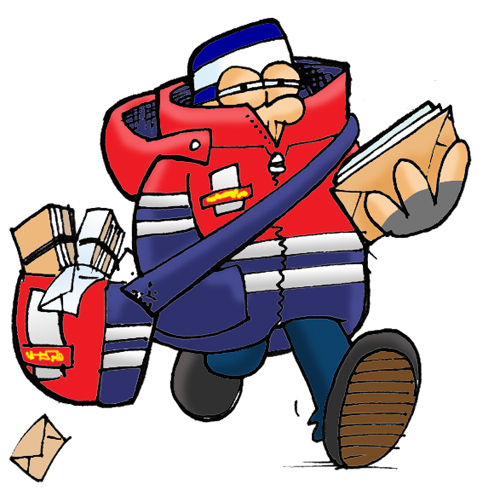 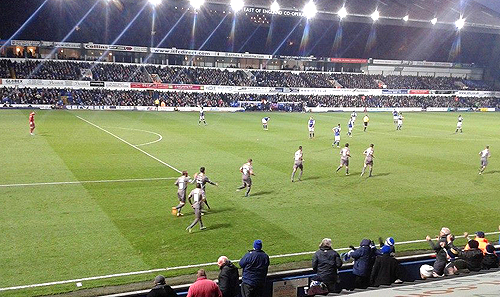 Nigel Pearson gave Hammond his first start, and Vardy returned to the side with Knockaert suspended.
But City suffered an early blow when the Tractor Boys went ahead in only the second minute.
McGoldrick found a bit of space on the edge of the area and beat Schmeichel at his near post with a low shot, leaving City with a stiff task.
It almost got worse soon afterwards when a short Konchesky back-pass allowed McGoldrick in, but Schmeichel denied him with a fine save.
City looked a bit rattled for a while and other than half chances for Vardy and Moore they produced very little in the first half.
The first real threat to Ipswich’s lead came just before the break when a King header from a Drinkwater corner forced Gerken into a fine save.

It was a different story in the second half. Pearson introduced James and Miquel for King and Moore and City looked much better.
They equalised in the 51st minute. Dyer’s speedy run down the left saw him cross for Vardy who teed up Nugent for a fine first-time effort that beat Gerken from just inside the area.
That was Nugent’s 12th goal in 12 games against Ipswich and the 13th wasn’t far behind.  Six minutes later more great work from Dyer saw him beating the keeper to a Drinkwater ball, before setting up Nugent of his second from close in, sparking wild scenes of celebration in the away section.
Ipswich pressed forward in search of an equaliser, but the nearest they got was a Chambers header that whistled past the left hand post.
City coped with everything else thrown at them and Nugent went close to a hat-trick when he couldn’t quite get enough curl on a late effort.

It was essential that City bounced back swiftly from the Forest result, and this they did, despite an early setback and poor first half.
This was a huge result, that saw them go joint top of the Championship.

The Remembrance Day fixture saw a 30,000 + crowd at the KPS, but it ended in disappointment with Forest making the most of their chances to earn a 2-0 win… 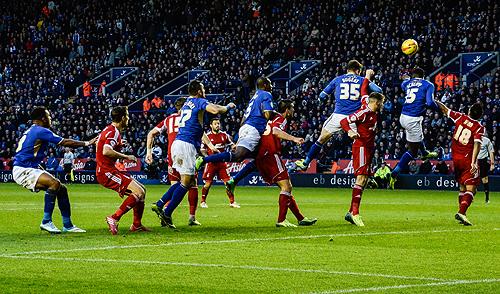 Nigel Pearson made one change to his side with Wood off on international duty, replaced by Schlupp up front and Konchesky returning to left back.
The opening spell saw City very much in the ascendancy, with Morgan heading wide from a corner and another header from Nugent forcing a fine full stretch save from Darlow. Between these incidents City were already being hindered by some bizarre refereeing decisions with Wasilewski going into the book, former City defender Hobbs not being booked for a worse offence and Knoackaert being cautioned for pointing this out.
City should have gone ahead soon after this as fantastic work by Knockaert through the heart of Forest’s defence saw him pick out an unmarked Dyer at the first post, but the winger fluffed his first touch and could only find the side netting.
A fourth good chance passed City by when Nugent couldn’t keep his header under the bar from an excellent Knockaert free-kick, and they were then given a lesson in economy of finishing as Forest took a half hour lead from their first opportunity.
Paterson ran in from the right and shot, this was blocked but the ball ran for Cox who fired home from close in.
This stunned the large home crowd and worse was to come three minutes before the break. Lansbury’s shot from a corner was blocked by Drinkwater on the line, but again the ball fell kindly for a red shirt and Mackie gleefully fired it into the roof of the net. 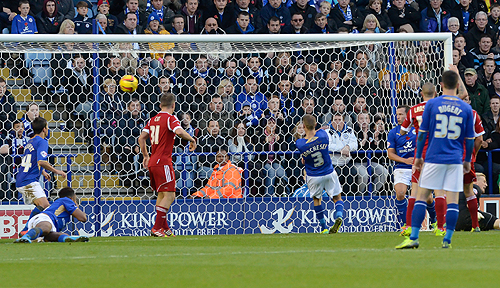 Matters didn’t improve for City in the opening spell of the second half. Forest, inspired by Hobbs, always got something to the ball in defence and home frustrations began to grow.
Pearson brought Vardy on for Dyer, and then Taylor-Fletcher and Hammond on for Schlupp and Knockaert but still things were not going City’s way.
That was until the 70th minute when Vaughan needlessly flattened Drinkwater just inside the area.
Nugent’s short, halting run-up and spot-kick that cleared the bar and landed in the Kop neatly summed up City’s afternoon. 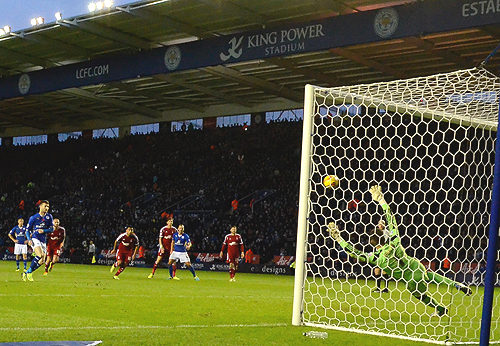 After the penalty miss City rarely troubled the Forest defence again, and the Reds became the first side to take three points from the KPS this season.  A hugely disappointing afternoon for the biggest crowd in three years. 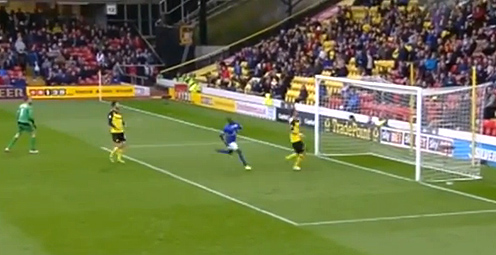 After a lively opening exchange City enjoyed a huge slice of luck in the 10 minute that gifted them the lead. An Anya backpass shouldn’t have given Hornets keeper Almunia any problems but he slightly miscued his clearance, striking the onrushing Wood in the face. The ball rebounded instantly into the net for an unlikely opener.
There were few chances in a tight encounter for a while, although Dyer and Wood both had the ball in the net only to be denied by the linesman’s flag for offside.
Schmeichel then produced a smart double save from McGugan, and Wasilewski nodded a Knockaert corner narrowly over, before City went in at the break with a narrow lead.
Nine minutes into the second half it was City who got the all-important second goal. Great work from Schlupp down the left saw him beat two players before teeing up Knockaert for an emphatic strike past Almunia. His celebrations in front of the City fans could hardly have been in greater contrast to the scenes following his penalty miss,  and they earned him a booking.
The lively Forestieri seemed to be Watford’s best chance of a route back into the game, but a series of chances for the Italian saw a block by Wasilewski; an off target effort, and a great save from Schmeichel.
In the 65th minute Pearson shored things up a little bringing James on for Wood and leaving Nugent on his own up front.
But Watford weren’t troubling City greatly and off-target efforts from Anya and Deeney was the best they could manage before City wrapped up the game in the  87th minute.
Substitute Taylor-Fletcher sent Dyer in with a neat through ball and although the winger’s shot hit Almunia it looped up and into the net to send the visiting fans into further celebrations.

The three points briefly saw City level on points with leaders Burnley, as this season continues to progress in a highly satisfactory way.